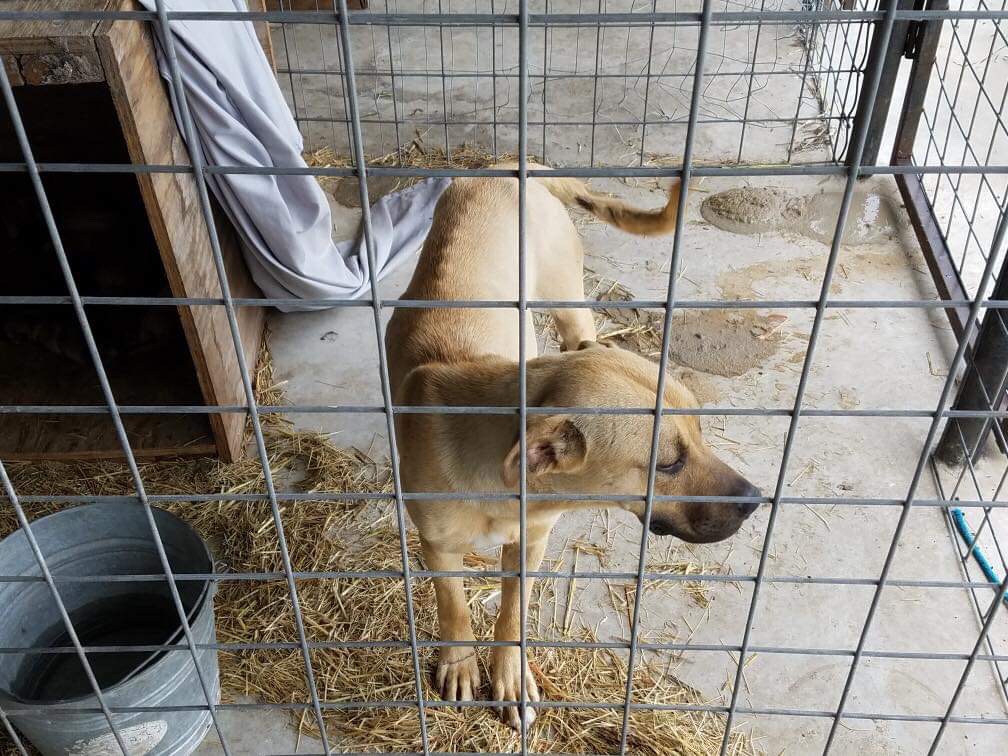 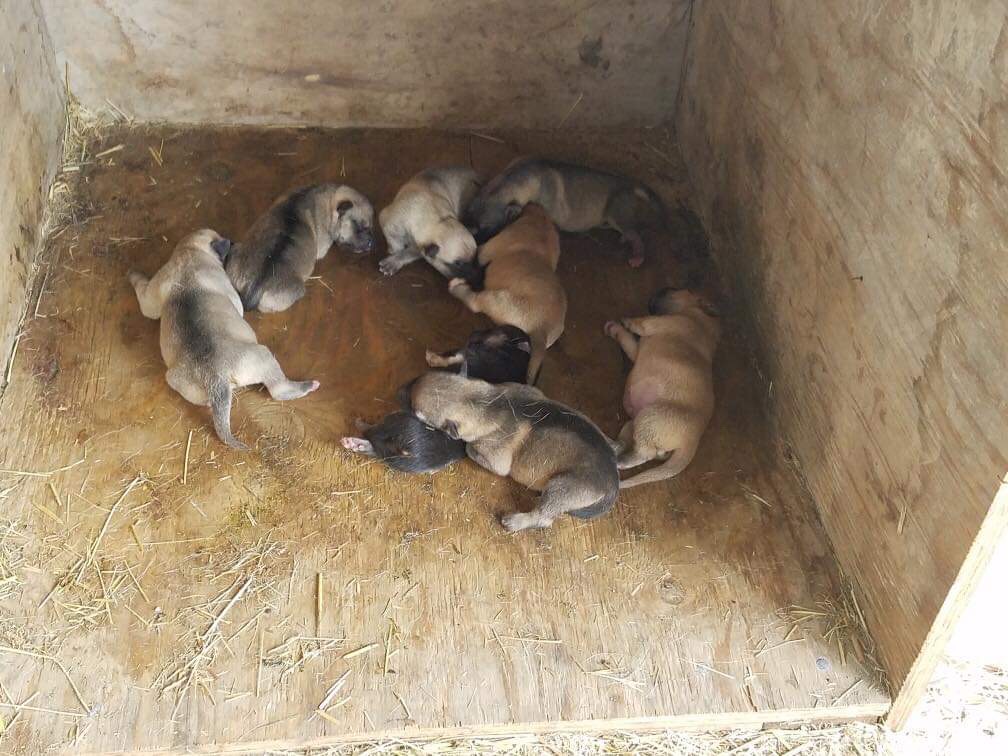 Penelope and the puppies in Animal Control

Penelope was picked up as a stray in Texas and is only alive for one reason. Before she was taken to the vet to be put down, she gave birth to a litter of 8 puppies while in Animal Control. As a result, Flights to Furever was contacted to see if help could be found, and it was!

When Penelope first arrived to Flights to Furever (FTF), she was extremely malnourished, pure skin and bones with all her ribs showing. However, Penelope was determined to be a great mom and take care of her puppies. The puppies weren't in the best shape and were diagnosed with coccidia. Mama and puppies were treated, cared for, and shown love for the first time!

Penelope and her puppies began to gain weight while in their TX foster homes. Unfortunately, Princess, the runt of the litter, became ill and was hospitalized. She was found to have a mild case of Parvo, which she was treated for and luckily survived! Princess is still the runt of the litter, about half the size of her siblings, but she more than makes up for it with her spunk! Mom and puppies were all healthy and ready for their trip to NY!

Princess was a foster-to-adopt and went directly to her furever home, while Penelope went to a foster home. Here's what Jennifer said about her time with Penelope:

"Penelope (now Penny) was the second dog I fostered. She just had 8 puppies two months earlier and just wanted to be loved. You could see the sadness in her eyes. Upon getting off the transport from Texas, Penelope gently stood on her back legs, put her paws on my shoulders, and gave me a hug. I almost cried. I was convinced she knew we were trying to help her. She was the sweetest dog! My dog and Penelope became quick friends and were joined at the hip. They played together, slept next to each other, and shared their toys. The day she was adopted, I cried. I cried because I knew she would finally be happy and have the life she deserved; one full of love. I only fostered Penelope for 6 days, but she has forever left paw prints on my heart." 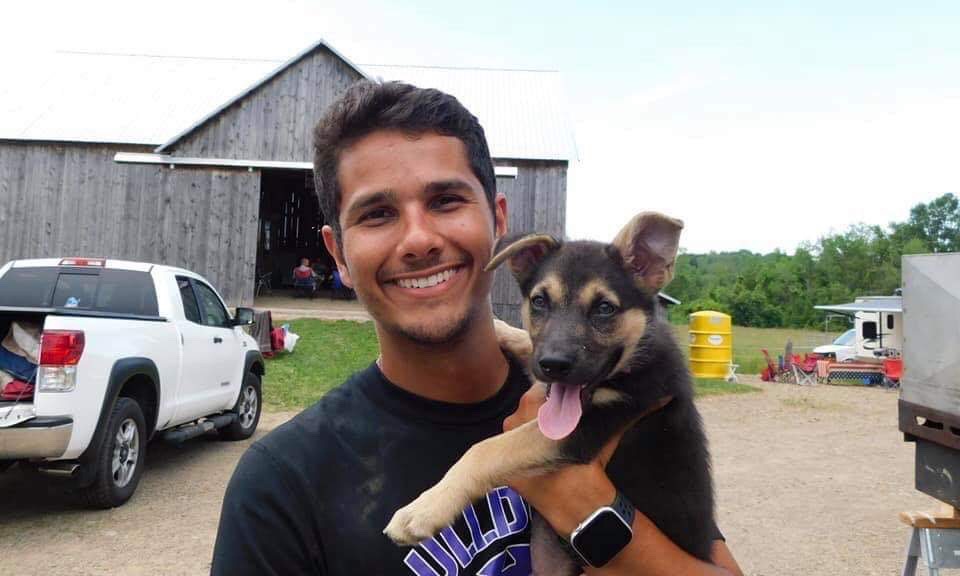 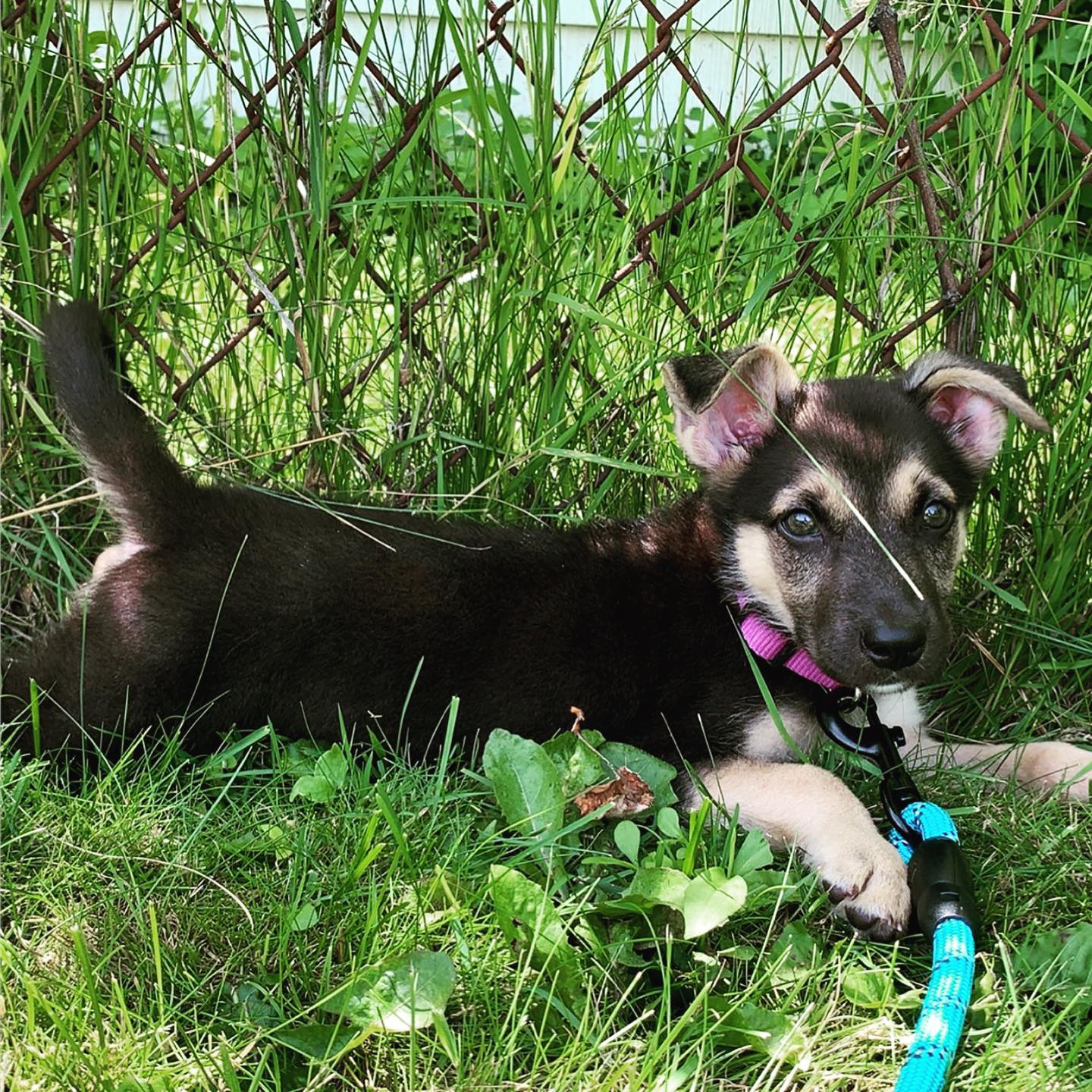 "Nickel City Canine rescue was the ideal place for adopting my first rescue. From the start they were always in touch, through email, their volunteers, FB messenger, you name it. From the first application, to the home visit, deciding to foster to adopt, the transport, and to ultimately adopting. Their workers kept me in the know every step of the way.

I could tell they were the place for me when the first dog I was looking at got adopted by someone else. Just a few weeks later, not too far down the line, a puppy fitting the kind I wanted became available, they got a hold of me! Now 3 weeks later I just officially welcomed my Khali into the house!

She has been a ball of energy every since we got her. NCCR was there the first few days with every question I could possibly think of. They really are knowledgeable & passionate about what they are doing. These first few weeks with her home been a challenging but rewarding process. Not only for Khali, but for us as well.

When we picked up Khali, previously Princess, at the transport it was a bittersweet moment, because we were so excited to be welcoming a new family member into our home. But at the same time we knew we were going to be separating her from her mother, Penelope. Before walking away we gave them the goodbye they deserved. They wagged, kissed, and snuggled one last time. It definitely was a tough moment, but in the back of my mind I knew we would be giving her a life she deserved.

There have been ups & downs these past few weeks with training and accidents, but slowly but surely progress has been made. We’ve both grown a lot in the short time we’ve been together. A major thank you to Nickel City Canine Rescue and all they’ve done, because thanks to them I found a furever friend."

"We are so in love with our new addition to our family! Penny is such a sweetheart. She loves to cuddle on the couch (or in the recliner!), loves to roll in the grass, and loves to go on car rides! She also gets bursts of energy while playing in the backyard, as you can see in the videos. We have quickly learned to watch out for her because she can barrel into us like a ton of bricks!

She and our cat Charlie have really warmed up to one another. They sleep near one another (no cuddling yet, but I think this will happen with time) and run around the house together. Charlie likes to play with Penny's tail.

We really could not have asked for a better dog. She rarely barks, and occasionally she’ll howl at some distant sirens (in a video). She is still learning about what toys are for - we don’t think she had toys in the past. But she has quickly caught on to fetch with the tennis ball!

My fiancé and I always knew we wanted to adopt a dog. We weren’t sure about where, but we knew that we were very against the idea of buying from a breeder. We both know that there are just way too many dogs out there that need homes!

We’re so happy with our experience with Nickel City Canine Rescue. From the approval process to the adoption, everything was well-explained, organized, efficient and helpful. We would highly recommend them to anyone looking to adopt a dog.

Penny, our little “Southern Belle,” is really settling in quite comfortably. We look forward to making so many memories with her!! Thank you for rescuing her!!"

Thank you for reading Princess and Penelope's stories!